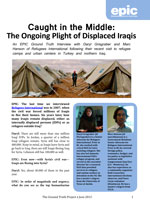 Today is World Refugee Day, a day when the world takes time to honor the resilience of forcibly displaced people throughout the world.

Last year alone 7.6 million people around the world were forced to flee conflict or persecution, adding to an estimated total of 45.2 million displaced people worldwide.

In the Middle East, the Syrian civil war and escalating violence in Iraq are contributing to a growing humanitarian crisis. The numbers are staggering. As many as 5.7 million Syrians and more than 3 million Iraqis have been forcibly displaced from their homes.

As part of our Ground Truth Project, EPIC sat down with Marc Hanson and Daryl Grisgraber of Refugees International to discuss their recent trip to refugee camps and urban centers in Turkey and northern Iraq. They were in the Middle East to assess one of the fastest growing humanitarian crises in the world today.

As part of our call for peace, EPIC is urging the Obama administration and Congress to strengthen humanitarian assistance to the Middle East. If you have not already signed our petition at Change.org, please do so today.

Thank you for being a part of today’s recognition of World Refugee Day.