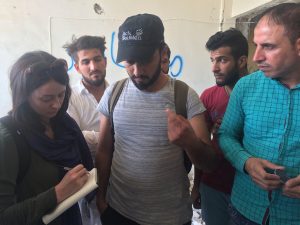 As they swept across northern Iraq in summer 2014, ISIS militants targeted members of the Yazidi faith in Sinjar – launching a genocidal attack on the ancient religious minority that galvanized a global response. Nearly two years after the town of Sinjar’s liberation in November 2015, the future for Iraq’s Yazidi community remains perilous. As regional actors compete for control of Sinjar today, the region has yet to be rebuilt or repopulated. Thousands of Yazidi women and children remain in ISIS captivity, and many more are displaced across the country and region.

On this edition of Iraq Matters, we are honored to welcome Cathy Otten, a British writer and journalist who has been based in Iraqi Kurdistan since 2013. Cathy’s writings on the social impacts of ISIS violence and the struggles of minority communities in northern Iraq have appeared in the Independent, Newsweek, TIME, the Guardian, and many other outlets. She is a regular commentator on TV and radio, talking about Iraq and the war with ISIS. Her upcoming book – With Ash on Their Faces – tells the story of Yazidi women and their tragic interactions with the so-called Islamic State.

Listen as Ms. Otten explains the situation facing many Yazidi families today – particularly women and girls – and suggests what may come next for these families as ISIS is driven out of their homeland. She also shares her thoughts on discerning facts amid the fog of war and the special challenges she has faced in her many years of covering conflict in northern Iraq.

To order a copy of Ms. Otten’s book With Ash on Their Faces, visit OR Books.

Join Us in an effort to bring lasting peace to Iraq and Iraqi Kurdistan.